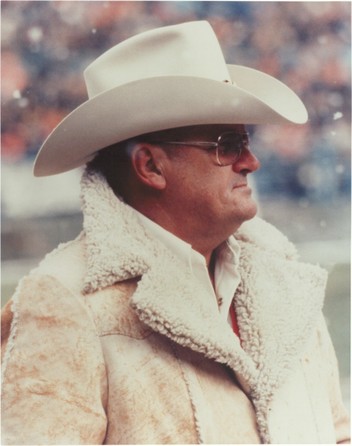 Bum Phillips (1923-2013) was born Oail Andrew Phillips, he received his famous nickname from his older sister who stammered and could not say the word “brother”. The name Bum stuck, and he has always explained, “Bum’s just a nickname, not a description!” The name, dry sense of humor, laid-back demeanor, winning tradition, and ever-present cowboy hat and boots all became a part of the Bum Phillips legend.
​
​That distinctive persona, however, betrayed a shrewd football mind. When Gillman brought Bum to Houston as his defensive coordinator in 1974, it took Phillips only one season to cut the Oilers’ points-against total from 447 to 282. The team was just backing out of consecutive 1-13 seasons, but riding on the strength of Bum’s defense; the Oilers turned their fortunes around that year, finishing 7-7 with more victories than the previous seasons combined. When Gillman stepped down the following year, Phillips was the natural to take over the head-coaching job. He responded by leading the 1975 Oilers to a 10-4 season revealing an uncanny ability to maximize his players’ potential. “Coaching is not how much you know,” Phillips said, “It’s how much you can get your players to do.”

Bum proved his adeptness at getting his players to perform at their highest levels when he took the Oilers to the 1978 AFC championship game with 21 free agents on his roster. Playing in the NFL’s toughest division, Phillips returned to the AFC championship the following year. Unfortunately, the Oilers fell for the second consecutive year to their division rivals, the dynasty building Pittsburgh Steelers.
“Football is a game of failure,” Phillips said. “You fail all the time, but you aren’t a failure until you start blaming someone else.” That willingness to shoulder responsibility made Bum a fan and player favorite wherever he went. He was an instant hit when he took over as head coach of the New Orleans Saints in 1980. He transformed the Saint’s NFL-worst defense into a unit that finished among the top-five defenses in the league over the next five years. Having rebuilt the Saints franchise through innovative scouting techniques and astute drafting, Bum retired from coaching in 1985 and returned to his first love, ranching. His son, Wade, was the defensive coordinator for the Houston Texans, and Wade’s son Wesley, is the tight ends coach for the Washington Redskins, to carry on Bum’s coaching legacy.

After retirement from football, Bum didn’t quit working. He and his wife Debbie operated a horse and cattle ranch in Goliad County, Texas, which Debbie still operates. He did advertising and motivational speaking and worked in literally hundreds of charity events with his main focus Bum Phillips Charities who raise funds and seek fundraising opportunities to build the camp and retreat center.